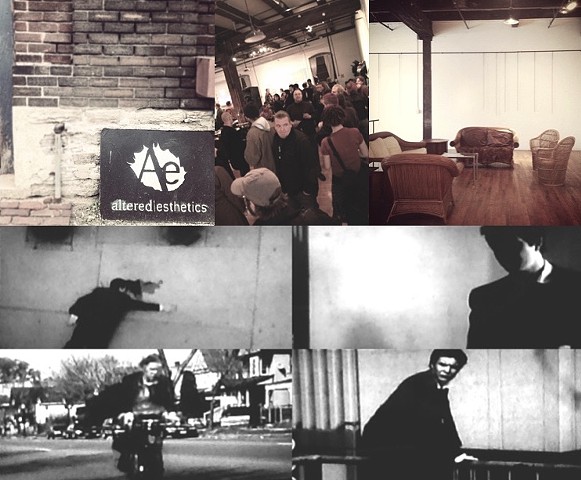 “Altered Esthetics brings together artists from a variety of disciplines to exhibit work that explores current political and social themes. By creating an intersection between art and socially driven issues, the gallery engages a diverse crowd beyond the sometimes myopic art scene. The Hitchock exhibition takes a detour from politically inspired work to focus on Alfred Hitchcock’s Alfred Hitchcock‘s influence on culture.”

This exhibition featured fine arts work that had some connection to, inspiration from, or juxtaposition with the milieu of Alfred Hitchcock's films. Shadow Stomach was a moving image installation on looped video home system analog tape which screened continuously on an old television monitor. Through stark black and white imagery and shrewd juxtaposition, Shadow Stomach reflects on suicide, oppressive power, politics, and depression in both life and fiction. It is named in reference to a form of acted suicide in Japanese theater called Seppuku.